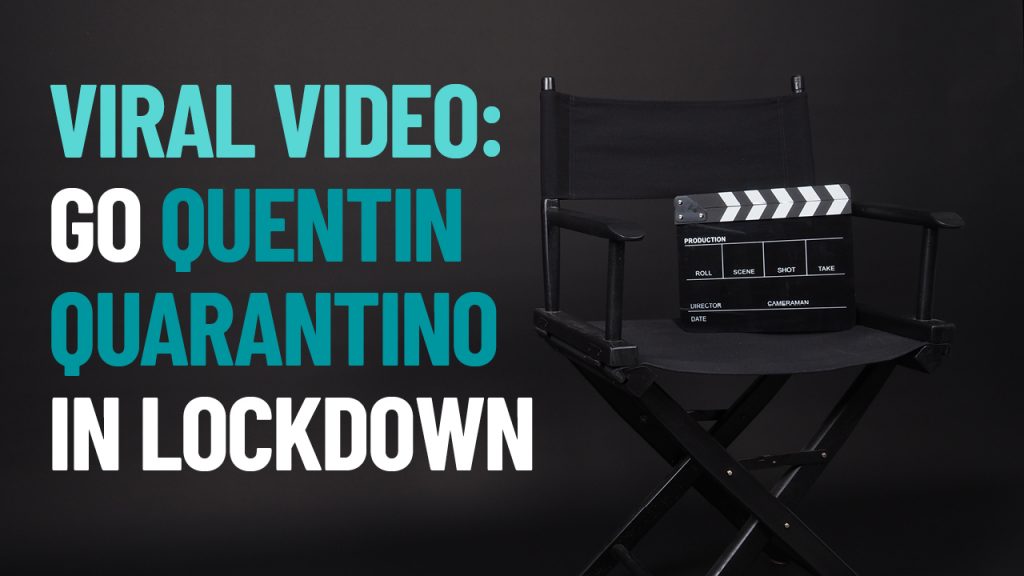 If you’re an entrepreneur or small business owner who wants to get into video creation during lockdown, read on. Your budget might be small or non-existent, but it’s possible to make professional-looking films from home without buying an expensive kit.

First, we’ll explain how to make a video using your iPhone, and then we’ll dive into some other handy tips from the Fourth Estate team.

How to make a video on iPhone

Of course, if you have a shiny DSLR hanging around at home, or something smaller, like a GoPro, that’s great, but these days most of us have a perfectly serviceable video camera in our pockets.

When using your phone to make video the first thing to remember is: Use the rear camera rather than the front camera. Some models, like the iPhone X, have front-facing cameras that can take 1080p 30fps video. But the back camera can shoot 1080p at 240fps or even 4K at 60fps. The quality is much better!

You’ll have to change your settings to enable your camera to take 4K videos, but that only takes a sec. Just go into Settings > Camera on your iPhone and change from the default under the Record Video options (Just be aware if you shoot at 4K you need to check you have spare storage on your phone to capture the video).

Ideally, you should use natural light and film in the morning or early evening when the lighting is most flattering.

If that isn’t possible, use artificial light with consistent brightness. For instance, a table lamp, ceiling light, or a ring light.

Don’t forget to face whatever source of light you’re using. This helps to brighten the appearance of your skin and features, for a more flattering shot. Whereas, when light streams in from behind, it drowns you out and reduces you to a mysterious-looking silhouette…which we’re assuming isn’t the look you’re after!

A lot of at-home interviews on TV at the moment all have something in common. Most are against a busy background – typically bookshelves brimming with books.

However, for general marketing purposes, go for a plain, tidy and solid coloured background. If that’s hard to find in your home, use a sheet or a large piece of fabric as your backdrop, and stand several feet away from it to avoid casting shadows.

If you’re using your phone’s in-built microphone, remember not to block it. If possible, use headphones with an in-built mic. These provide much clearer audio than the phone itself as the mic’s right next to the mouth. Or better still, invest in a USB mic.

Try not to fidget or appear nervous.

Instead, use open body language. Sit or stand straight and keep your shoulders back – and remember to smile, especially at the start of the video. Use expressive body language and hand movements to emphasise what you’re saying.

Try to speak slower than usual. Do a few breathing exercises before hitting ‘record’, so you’re talking from your diaphragm, not your throat. This will help with the clarity of your audio.

Remember that you are not shooting live footage – you can edit the video afterwards – so don’t put too much pressure on yourself. Get comfortable with the camera and repeat each section until you are happy with it.

You can use the inbuilt editor to crops clips if you like and then transfer the footage to your computer for more advanced video editing using software like iMovie, Adobe Premiere or Final Cut Pro if you have it (if you don’t have the budget for video editing software, there are often free trials you can utilise) or online tools like Vimeo Create. Or you can edit the video on your phone, using any number of free or paid video production apps for iOS or Android. Again, iMovie and Adobe Premiere Rush are favourites.

Give yourself time to practice and fine-tune before going ahead. If you use the tips in this article, you shouldn’t go too far wrong.

Feel free to get in touch if you’re feeling all Quentin Quarantino and you want more advice on video creation during lockdown or if you want to find out more about our video or promotion services.

https://www.fourthestatecreative.com/article/the-magazine-model/
https://www.fourthestatecreative.com/article/the-in-house-content-creation-myth/
1122
Making videos from home | Fourth Estate Creative
Even when you're stuck at home it’s still possible to make some decent marketing videos for your business if you know the best practices and what pitfalls to avoid.
Paul Evans
50%
50%
Remember that you are not shooting live footage - you can edit the video afterwards - so don't put too much pressure on yourself.
content_category,content_tag
PRODUCTION
Remote Working
Video Production
ABOUT
SERVICES
APPROACH
WORK
CONTENT
CONTACT
PRINT
WEB
DIGITAL
VIDEO
AUDIO
PROMOTION
TEAM
CLIENTS
TESTIMONIALS
NEWSLETTER
DATA POLICY
TERMS OF SALE