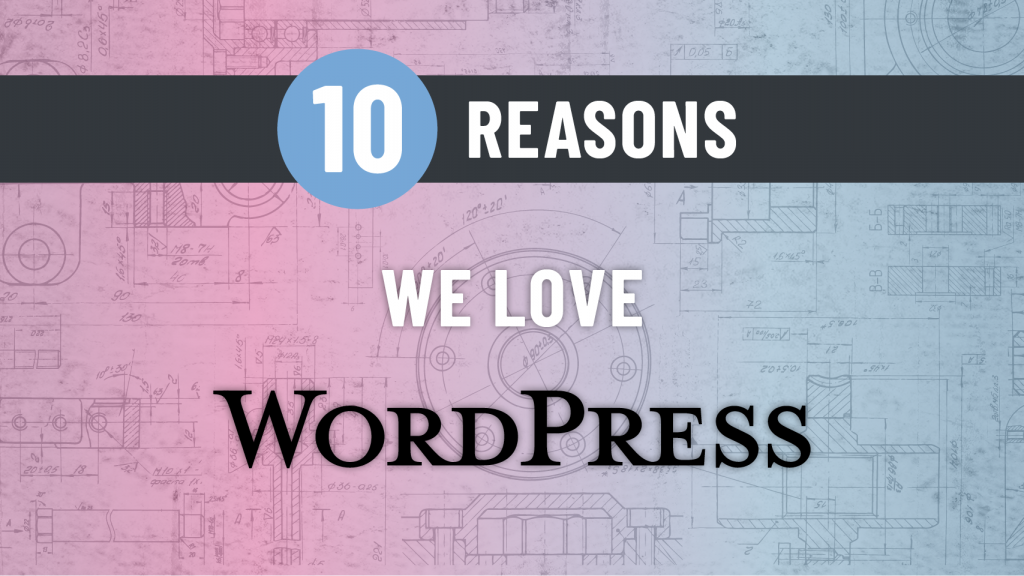 In May 2019, the world’s favourite content management system enjoyed its sweet 16. Back in May of 2003 the first release of WordPress was announced on the WordPress.org site by Matt Mullenweg who, along with English developer Mike Little, founded the project to create the now-ubiquitous software.

Today, WordPress is used by more than a third of the world’s top 10 million websites and the company that develops it, Automattic (of which Mullenwegg is CEO) is valued at over a billion dollars.

We thought we’d share with you just ten of the many reasons why we love using WordPress for our site development.

It’s easy to underestimate how important this is. As we’ll mention later this has a huge impact on accessibility for non-developer users around the world, but it’s really the non-proprietary nature of WordPress that has made it so versatile and helped create the ecosystem of plugins provided (often also for free) by a global army of independent developers. It also means it’s ready for one-click installation with most modern hosting companies. WordPress is not just free at the point of delivery, it continues to be updated, with new functionality and security all the time, with new updates easily installed, automatically or manually, for free.

Not only can themes be easily customised, but the structure of a WordPress site means that types and taxonomies can be created to suit any content approach. We’ve built sites where articles need to be listed at three different levels of categorisation and also be tagged so that users can search for pieces in whatever way they want. WordPress makes this kind of user interface easy. “Yes!” in the immortal words of Alan Partridge “it’s an extender!” WordPress is a simple, elegant piece of software that can be put to an infinite number of uses in the hands of skilled developers. You can create anything from a microsite to a huge eCommerce platform within the software.

Beyond what can be achieved through themes and plugins (and there are many integrations that can be managed through a simple plugin – from Mailchimp to Facebook Pixels) for enterprise sites it’s often necessary to integrate proprietary systems like CRM, eCommerce or accounting software. Third-party software and APIs can be easily integrated with WordPress by a developer through PHP.
*If you’re a web developer.

There have historically been concerns about the security of WordPress sites, but with the so many developers working hard to keep it safe it’s a remarkably robust system so long as you keep it updated and only install software from trusted sites like the wordpress.org website itself. For the vast majority of sites WordPress is easily secure enough. At the end of the day, if it’s good enough for Nasa, it’s probably good enough for you. But WordPress won’t only protect you from external attack. It also deals with internal risk by supporting multiple user types. For enterprise sites having different levels of users with customised permissions and settings is absolutely crucial. Overall executive control can be given to a Super Admin who can also freeze any other user account quickly and completely if needed.

Because WordPress has such a large community of dedicated developers (inside and outside Automattic), troubleshooting is pretty effortless. There’s rarely a problem you come across that doesn’t have a solution laid out online, or which hasn’t already been solved in one of the enormous range of themes and plugins available for easy installation. On the rare occasion you find a genuinely new problem or use case, there is an unapparelled support network ready to help you find a solution.

WordPress was set up as blogging software, it puts content at the centre of its offering. This has in turn helped developers to more quickly and easily develop sites that are driven by content, making ‘blogging’ a normal part of even corporate websites. The post editor makes bringing in rich media like images, audio and video files and content embeds as easy as adding text. WordPress makes combining great content with beautiful design the default. As our tagline says, we wholeheartedly believe in content with substance, beautifully crafted.

WordPress is well structured and created with high-quality, compliant code to help you meet technical SEO requirements. It also has a fast loading speed, XML sitemaps can be easily generated and crawled by search engines and it’s easy to make WordPress sites responsive for tablets and mobiles. With the help of plugins like Yoast, on-page and off-page SEO can also be easily managed using the same simple, intuitive interface that made WordPress so popular among bloggers in the first place – and you can schedule content to easily spread it out even if you don’t have time to come back and post regularly.

8. It has a distributed workforce

We really have to mention that while Automattic has nearly 900 employees (known as Automatticians), just like Fourth Estate Creative, almost all of them work from home (or wherever else they want) and the company doesn’t have a central office, meaning they pull in talent wherever it is in the world, rather than relying on a local pool. Maybe that’s why the company pulls in nearly 65% as many monthly uniques in the US as Google (ranked 4th overall) with a workforce less than 1% the size of the search engine giant. We believe strongly in the many benefits of working remotely and the pre-eminence of talent in hiring decisions so it’s always good to see a company several orders of magnitude bigger than us able to pull it off so successfully.

WordPress puts genuinely enterprise-level software in the hands of anyone who wants it, regardless of their resources. As Mullenweg put it in a 2015 interview “You or I can download and publish using the exact same software that The New Yorker does for their newyorker.com. And I think that is relatively unique in the history of the world. You know, you or I wouldn’t have access to the same printing press as The New York Times, but in the digital world you or I can have the same software as The New Yorker.” WordPress’s approach to ownership is also really important for its democratising credentials. If you have created a WordPress website as opposed to say one with a popular website builder like Wix – where you could lose your site if you stop paying the monthly fees – you can pick up a WordPress site and move it where you like, even just storing it locally until you want to start hosting it again.

10. It’s even better for developers

As Fourth Estate Creative’s Head of Web Mika Sadler (who, thanks to our distributed approach was speaking from sunny Spain) says: “I have worked on various CMS systems built on many technologies. WordPress is the best example of the beauty of simplicity. It has a lightweight architecture built on open source technology (PHP and MySQL). It’s seminal system of ‘Hooks’ allows skilled developers to tailor what was originally a blog into anything your enterprise requires.

It has grown up now and there is a large ecosystem of plugins including some high-profile ones such as WooCommerce. The amount of support online as a developer is enormous and it’s truly a joy to work on WordPress.”

https://www.fourthestatecreative.com/article/is-content-a-dirty-word/
https://www.fourthestatecreative.com/article/the-magazine-model/
1122
Ten reasons we love WordPress site development | Fourth Estate Creative
Like many agencies, we use WordPress for our website development, both for our own sites and the client sites we build. Why do we love using this platform so much? Let's start with ten reasons and you let us know if you need more.
Fourth Estate
50%
50%
“Yes!” in the immortal words of Alan Partridge “it’s an extender!”
content_category,content_tag
PRODUCTION
Content Production
Web Development
WordPress
ABOUT
SERVICES
APPROACH
WORK
CONTENT
CONTACT
PRINT
WEB
DIGITAL
VIDEO
AUDIO
PROMOTION
TEAM
CLIENTS
TESTIMONIALS
NEWSLETTER
DATA POLICY
TERMS OF SALE