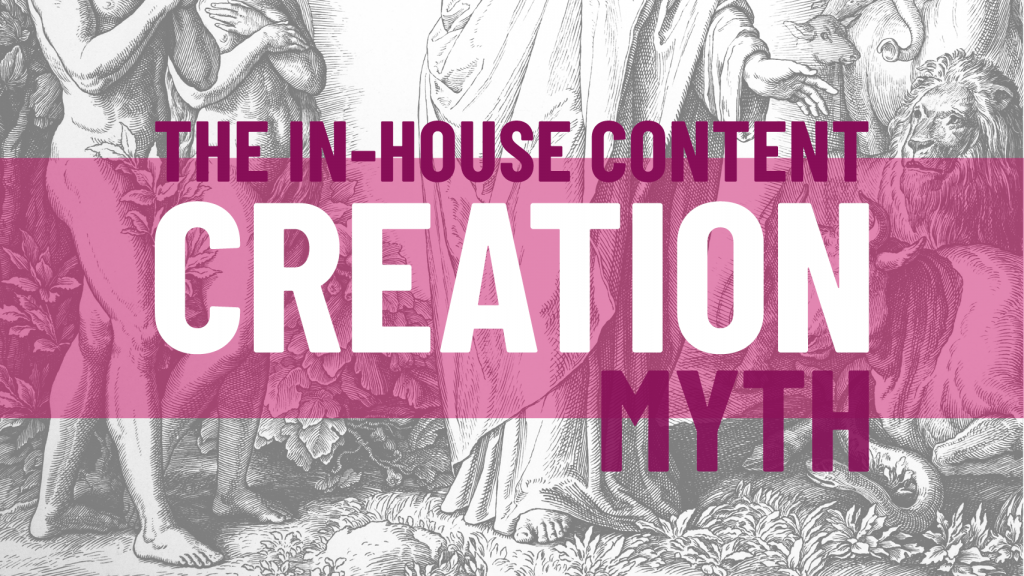 Some years ago, I was in charge of hiring and firing the in-house content creation team for a B2B magazine publisher. One spring, after trawling through hundreds of applications and speaking to a dozen shortlisted candidates I managed to find one young man whose talent really stood out. Let’s call him Adam. I hired Adam immediately. Over the first year we worked together he was regularly late, slow to start work, easily distracted, abrasive, temperamental and defiant. He was one of the best talents I ever employed. I still work with Adam today.

Creative people can be difficult. The work they do is often solitary, requiring at times painstaking concentration, and at other times extended breaks waiting for inspiration (with or without pacing back and forth, squawking). Of course, not all creative people are troubled geniuses that don’t play well with others. Many are perfectly amiable, down-to-earth folk, who will cheerily clock in and out with rest of us.

The point is just that the traits companies so routinely look for in good employees seem to have no correlation whatsoever with creative talent. In fact, the search for those ambivalent qualities that every young job hunter knows to include on their CV – the ability to work individually and as part of a team, comfort with both leading and following, being creative and challenging but also compliant and deferential – are contradictions that push most hiring managers into choosing creatively average people.

Courteous moderation is a mainstay virtue because of the shared environment of the office. The office makes further demands – good timekeeping, resistance to distraction, availability for a specific number of hours each day – which are also unconnected with ability at writing or designing or editing videos.

But what happens when we take the office out of this picture? Having a remote (or even virtual) workforce increases the pool of creative talent available to us. First, you lift the biggest restriction of all; location. By doing so you extend your search space from 20 square miles to 200 million. You also include those people who can’t commit to a steady working week, like stay-at-home parents and those with long-term health conditions. You include the cynical, difficult or otherwise different people who wouldn’t fit into your corporate culture or see eye-to-eye with management. You include the people who’d get bored just working for one organisation. You include the insomniacs and the oversleepers. If you pay people for their work and not their time, you can even include the slow workers, the easily distracted and those inefficient perfectionists who take all day to do one thing (really well).

Given all of the above, it’s no surprise I find it an order of magnitude easier to find good creative people for the agency through our Freelance Fellowship site and my many freelance connections than I ever did through recruitment.

Now that’s not to say that there aren’t many very talented creative and technical people working on in-house content creation for both creative companies and within organisations large enough to justify a large, varied and expert team of content and marketing professionals. Of course there are.

But at smaller organisations – which make up the large majority of all companies in the UK – the DIY approach can have significant drawbacks. It’s instructive to look at the driver behind doing in-house content creation. It’s often tempting to think that when you do something in-house you’re not really paying for it. You can fall into a sort of sunk-cost fallacy because you’re using money that’s already committed. The cost sits under overheads, not expenses, so it doesn’t feel like spending.

Of course, you are spending – at exactly the proportion of those staffer’s wages as they spend of their time – but most companies don’t count up those hours and calculate the bill. And because they feel they’re getting something for nothing they’ll often excuse that Pete in IT has no idea how to run an SEO review of the company website or that Susan in Marketing is not properly qualified to design and execute an email marketing campaign. They’ll ‘learn on the job’.

And I’m not just looking to poke fun at Pete and Susan. They are likely very good at their core jobs and it is probably their management that fails to see the difference between specialisms and lump all technical work under ‘IT’ and creative work under ‘Marketing’. As a creative content agency, we need to recognise distinctions like this – between print design and web design, between journalism and copywriting, between SEO and PPC, between animation and illustration. They take very different skills, knowledge and approaches. Companies that ignore such differences run the risk of producing bad work and pissing off their staff.

For those companies who realise they do need someone devoted to in-house content creation or technical marketing, the cost of a dedicated hire can be daunting. These are highly skilled disciplines and those who have spent years mastering them will not come cheap. Many companies will, therefore, look to hire someone fairly junior who can do a bit of everything – a bit of coding, some design, writing, social media, and so on. And we all know the problem with jacks of all trades.

Even large companies with several dedicated hires can’t afford the overheads to employ one designer for print, another for web, another for graphics and another to produce marketing collateral – so the same person ends up doing it all. They probably don’t enjoy most of it, and they often won’t do a consistently good job. Variety is not just about keeping things fresh either. There is a real need for so-called ‘snipers’ – workers with a very specific set of skills. Whether it’s 3D modellers or Michael Caine impersonators (true story), companies will always need some people outside their core abilities.

Add to this the fact that there is often a lack of technical or strategic expertise at management level that can lead to money wasted on ineffective marketing and advertising efforts – like budgets that all go on PPC, because there’s no organisational understanding of SEO, or money spent on expensive corporate videos, with none left over to develop an audience for that video, or money spent sponsoring social posts, because they have no intrinsic interest to the market – and the in-house content creation bill starts to look very high.

Employing an agency can be a great way of shifting that cost out to experts with the skill and judgement to get things right the first time. They’re more reliable too – agencies don’t have holidays or sick days – but if in-house teams are often jacks of all trades, agencies are often masters of just one – with a single specialism, covering a small part of their client’s need.

Agencies have to worry about in-house content creation staff costs too and keeping a standing army of experts in all technical and creative areas you need is very expensive. Those agencies that are genuinely cross-platform tend to come with a price tag that will send you running back to Pete in IT. And most agencies are office-based. They have to deal with the same problems I outlined at the beginning of the piece.

There is a new approach. Virtual agencies like ours are forming – with no central offices – and collective – with all the work carried out by freelancers.

In our team of freelance creatives each is a master of their art – so we can offer a huge breadth and depth of talent – but we only pay them when needed so we don’t have the staff costs or premises overheads that make most agencies so expensive. Our clients work directly with us, so they don’t take on the risks of using an unreliable and unverified online marketplace for freelancers or the work of managing lots of different specialist agencies and freelancers.

And before you worry too much about these ‘gig economy’ workers, this is not an area we’ve entered lightly. We believe if you want the benefits of freelance workers – low overheads, flexibility, specialism – you should provide benefits back to the worker. These include offering them the flexibility to work whenever and wherever they want; paying them for their work, not their time, and always at the same rates (meaning they can compete on time, a proxy for competence, rather than on cost); helping them to find relevant and fulfilling work; dealing with difficult clients on their behalf, and not micro-managing them. Perhaps most important of all, if you expect immediate availability, you should be prepared to pay immediately as well. We laid out this manifesto of sorts in our approach to freelancing.

In-house content creation staff are of course important – they know your business better than we ever could – but communicating your business’s value is too important a job to be done part-time or by non-experts. Most in-house staff – often made to work outside their skillset and are of interest – would be the first to agree.

Content creation and marketing can look easy, but they are deceptively hard to get right. Companies would do better using their in-house team to develop the key goals of the company’s content and marketing efforts and communicating them out to experts.

Organisational change can be difficult. It’s a hard truth, but if companies ran calculations on all their content and marketing efforts, including all staff time, and asked themselves if they wanted to spend the same amount next year on the same inexpert work and ineffective campaigns, many couldn’t honestly answer in the affirmative. And if you’re not deciding now to spend that money better, you’re deciding now to waste it again.

Marketing spend is supposed to be an investment, not a cost, if you invest it more wisely it should be having an upward, not downward push on your bottom line.

https://www.fourthestatecreative.com/article/making-videos-from-home/
https://www.fourthestatecreative.com/article/where-does-branded-content-come-from/
1122
The In-House Content Creation Myth | Fourth Estate Creative
In-house content creation can be begrudging, inexpert and ineffective. While it seems like a saving it's often a waste of money - and potential revenue.
Paul Evans
50%
50%
It’s often tempting to think that when you do something in-house you’re not really paying for it. You can fall into a sort of sunk-cost fallacy because you’re using money that’s already committed
content_category,content_tag
PRODUCTION
Content Marketing
Content Production
ABOUT
SERVICES
APPROACH
WORK
CONTENT
CONTACT
PRINT
WEB
DIGITAL
VIDEO
AUDIO
PROMOTION
TEAM
CLIENTS
TESTIMONIALS
NEWSLETTER
DATA POLICY
TERMS OF SALE